Due to the Covid pandemic unfortunately it was necessary to cancel our annual Mayor's Awards presentation for 2019 / 2020, so the evening was held to celebrate both sets of recipients.

The Mayor's Awards for Services to the Community for 2019 / 2020 was presented to Mr Alan Armson and Mr Colin Woods.

The Mayor's Awards for Services to the Community for 2021 / 2022 was presented to Kathy MacKenzie, Christine MacKenzie,
Mr Peter Armstrong and Mrs Maureen Horsley.

Details of the nominations for each of the winners can be found below.

Congratulations to all of our Mayor's Awards winners, all truly worthy recipients. 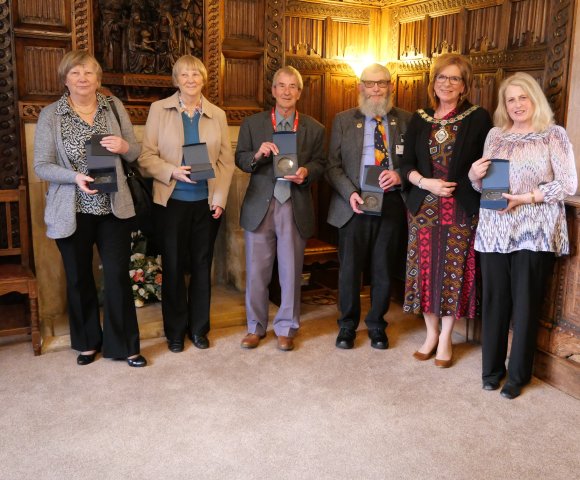 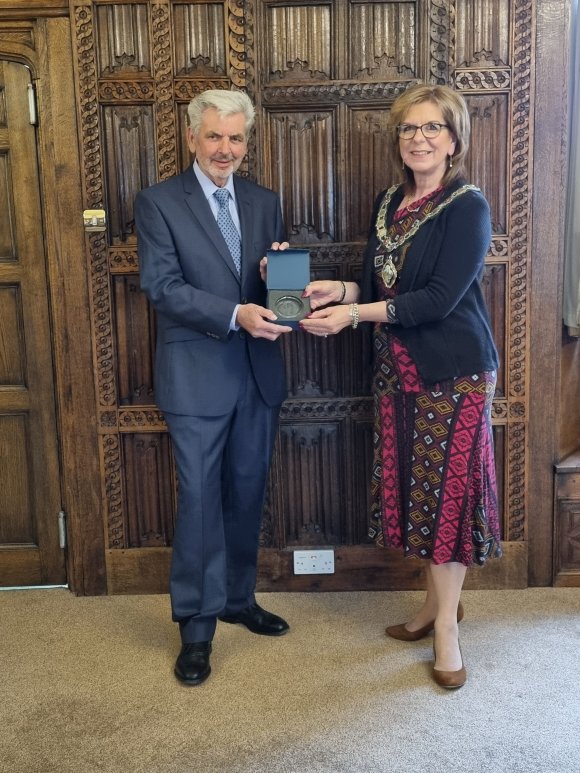 On the evening of the 19th March 2019 the annual Mayor's Awards Ceremony for Services to the Community took place at Rushden Hall. The Town Mayor, Cllr David Coleman, presented an award to Mrs Jean Anderson, a truly worthy recipient.

Jean has lived at Imperial Court with her husband John, for the last 8 years. Jean is the unofficial volunteer fund raiser and over the years she has gone out to the local community to find ideas and meet people, to try and raise funds for residents activities at Imperial Court.

At the end of last year she contacted local retailers asking for donations for the Imperial Court Christmas raffle. She managed to acquire so many prizes that there was no need to purchase any more out of the activity funds!

Well done on all your efforts over the years Jean! 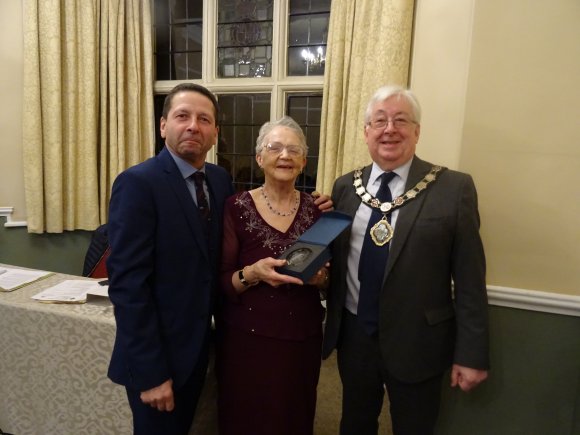 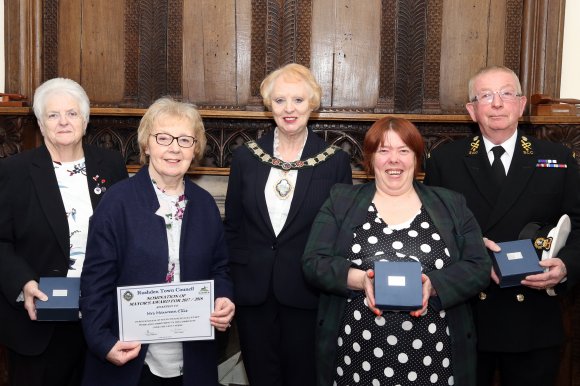 Joanne Vissian, of Wymington, was nominated by Cllr Janet Pinnock for all her help with town council events – especially litter picking!

"Jo is very much at home at Party in the Park with a black bag and picker in her hand and keeps the litter down in the park throughout the day. Her willingness too to help at the Christmas event does not go un-noticed. We always know we can count on Jo if we need extra hands. In fact Jo is a great asset to the Events Working Party and I feel an award to thank her for all the hours she has given to the community would be a fitting reward to a much deserved recipient."

Paul Clarke of Higham Ferrers was put forward for the award by PO John Blackadder from the Rushden Sea Cadet Corps.

He said: "Paul previously serving in the Royal Navy and is a veteran of the Pingat Jasa Campaign, a dedicated volunteer passionate about supporting veterans and a mainstay at T.S. Diamond, Rushden, branch of the Sea Cadet Corps. As well as his service in the Royal Navy, Paul has served as a detective sergeant with Northamptonshire Police. He was also a founder member of the Rushden branch of the Maritime Volunteer Service and when not working as a Chief Petty Officer at T.S. Diamond, he teaches disabled and disadvantaged people how to sail on Grafham Water."

"In the Sea Cadets as an experienced adult volunteer, Paul's organisational skills and willingness to lead by example, establish standards and motivate his group maximise attendance at drill nights and ceremonial events. He is the longest serving member of the unit, and has helped it overcome many challenges. I believe it is fair to say that without Paul's commitment the unit would have closed. Currently, as well as being the coxswain on board T.S. Diamond, he works in a caretaker/maintenance capacity, and can be found most days at the drill hall, either maintaining uniform kit and equipment or helping contractors. Paul is also heavily involved with The Heritage Chapel which he supports."

Michelle Ellis spoke up for Janine Musson. She said in her nomination "Janine moved to Rushden in 2002 following retirement from work, knowing no-one but family. Janine committed to building a social network through volunteering at a number of organisations in Rushden. On a Tuesday morning Janine volunteered at the Mission Church serving refreshments to the local community. Regrettably Janine has just withdrawn from this service but very much enjoyed her time there. Tuesday evenings sees Janine singing with the St Cecilia Singers, performing at several concerts throughout the year for the local community. On a Wednesday morning Janine volunteers at Rushden Park Care Home. Janine organises the church service which takes place in the home every week, booking the vicars, printing the hymns and playing the organ. Janine arrives early to assist the staff in bringing the residents from their rooms and helping to return them after. Many years ago, conscious that many residents had limited contact with young people, Janine often took her grandchildren along to sing-a-long and share a biscuit."

"Janine has also taken on the duty of treasurer and helps out at the summer fete. She also volunteers at the Heritage Chapel where she has a number of duties. Janine plays the organ at Sunday services, is on a rota for cleaning the church and flower arranging, helps with bookings including opening and locking up afterwards and assists at events. She has had a huge involvement with gymnastics for many years and is currently the welfare officer for Eclipse Gymnastics."

"Janine is responsible for safeguarding and promoting the welfare for young people within the club. While this does not take place within Rushden, Janine also runs a gymnastics club back where she used to live in Flitwick, Bedfordshire. Janine coaches voluntarily three nights a week travelling for about an hour each way to attend the sessions. Janine is also east regional chairman for acrobatic gymnastics, Bedfordshire County Gymnastics chairwoman and organises all acrobatic competitions covering the east region."

Maureen Ellis was also nominated but, as she already has a Mayor's Award from 2012, was invited along to the presentation to receive a certificate for her continued voluntary work and commitment in the community over the past five years.