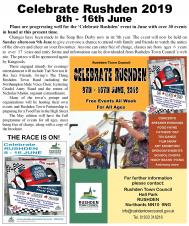 Rushden Town Council is very pleased to present our second 'Celebrate Rushden' week of events, albeit it is really our 7th year since we started in 2013 with 'Get to Know Rushden'.

The concept of the event remains the same where we are promoting our great town of Rushden with lots of events for you to enjoy with almost all of the events free to attend.

the big change this year is that with the Soap Box... Read More » 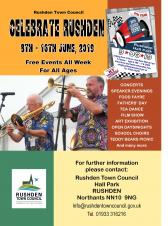 We understand there is a printing error in the celebrate Rushden brochure, for clarification the Nicholas Martin concert on Tuesday 11th June 2019 will be held at St Peter's Church, Midland Road and NOT the Heritage Chapel as advertised. 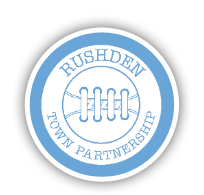 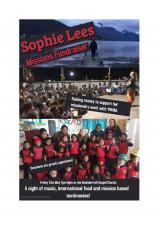 A night of music, international food and mission based testimonies at the Rushden Full Gospel Church on Friday 31st May between 7pm - 9pm. 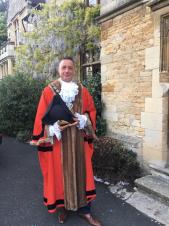 On the 14th May 2019 at the Annual General Meeting of Rushden Town Council, Cllr Cesare Marinaro was elected as Town Mayor for 2019 – 2020, and his wife, Mrs Sabina Marinaro, was named as Mayor's Consort.

A45 Road closure - both directions at the contraflow near Rushden this weekend - Fri 10/05 midnight - Mon 13/05 5am
"With our preparation works now almost complete, we will carry out demolition of the bridge and install the new bridge deck between 00:01 on Saturday 11 May and 05:00 on Monday 13 May. The equipment we use means some disturbance is unavoidable, but we will make every effort to minimise... Read More » 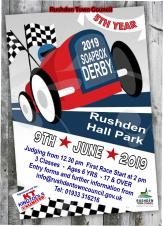 Soapbox Derby Sunday 9th June 2019 - Please can you send in your application forms to us ASAP.

These can be downloaded from our website by clinking the link below 👇, or pop into Rushden Hall, Hall Park and collect one.

European Parliamentary elections are scheduled to take place on Thursday 23 May following agreement by the European Union and UK to extend the Brexit deadline to the 31 October 2019.

Residents are reminded that there are no local council elections for East Northamptonshire Council on 2 May. The Government has postponed Northamptonshire's local elections by one year following the proposals to restructure... Read More » 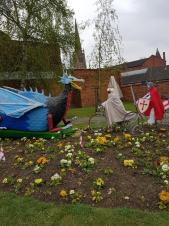 The bikes in Rushden were decorated to celebrate St George's Day!