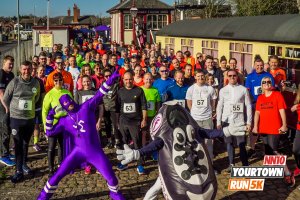 The event was a sell out, 100 people signed up to run the circular route which started and finished at Rushden Historical Transport Museum. The 5k Community Run certainly achieved its primary aim which was in bringing local people together in a positive and energising way and at the same time raising funds for two local causes, the Rushden Historical Transport Society Victorian Goods Shed and the Higham Ferrers Community Library Group.

Rushden and Higham Ferrers Town Councils would like to say a big thank you to the many volunteers who gave up their time and helped make the day a success, also thank you to the following local businesses who supported us by donating items for the runners on the day:

A total of £742 was raised for the local causes.