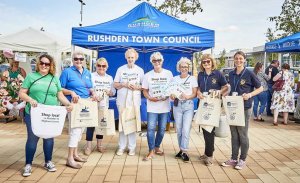 The Rushden and Higham Ferrers Heritage Family Fun Day took place on Sunday 15th September at Rushden Lakes, the fun filled day was held as part of the annual 10 day Nene Valley Festival and as part of the National Heritage open weekends. The event was supported by Rushden Lakes and brought together a family day out together with an opportunity for new visitors to learn all about the heritage and history of the local towns.

Local businesses from Rushden and Higham Ferrers were invited to have a stall free of charge at the event. Over 40 local businesses and community groups were pleased to take up an opportunity to set up a stand and promote their business and wares to a new audience. Highlights of the day included an open top bus tour with local tour guides showcasing points of interest and heritage in Rushden and Higham Ferrers, the screening of the Higham Ferrers Charters film in Cineworld and the launch of the autumn edition of the "Shop Local" voucher booklet. Other entertainment included performances from local bands, medieval fun and entertainment, heritage displays, family activities and a chance to meet Rushden Town Council's mascot, Cyril the Squirrel, plus the opportunity to browse a variety of local displays and exhibitions.

Copies of the annual "Shop Local in Rushden and Higham Ferrers High Streets" booklet containing over 48 redeemable discount vouchers were handed to visitors on the day, further copies of the booklet are available to collect from many outlets in both High Streets. Other giveaways on offer were promotional tote bags containing interesting local literature and goodies aimed to encourage new visitors to come and explore the nearby towns.

The Heritage Family Fun Day was organised by Rushden and Higham Ferrers Town Council's in partnership with Rushden Lakes and Nene Valley Festival. The aims of the Heritage Family Fun Day are to raise awareness of all that is available in Higham Ferrers and Rushden and to showcase the local heritage plus give a snippet of information about the local area.