90 years since the official opening of Hall Park 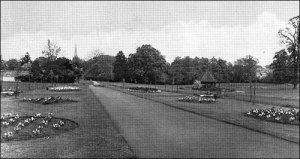 Today marks 90 years since the official opening of Hall Park!

A historic day later described as "the greatest seen in Rushden."

On Saturday 20th September 1930, Hall Park was formally opened to the public by the Chairman of the Urban Council, Mr. G. W. Coles, J.P. Unlike today, the weather was described as 'Inclement Weather', but did ease off just in time for the opening ceremony.

A quote taken from the Rushden Echo and Argus (1930) reads, "Both the Chairman of the Council and Dr. Greenfield, who presided at the opening ceremony emphasised the fact that the Park belonged absolutely to the townspeople, although it would be administered by the Council, and they appealed for the property to be respected and cared for, so that it might be handed to future generations as a wonderful heritage in an excellent state of preservation."

Thank you to the Rushden & District History Society Research Group for use of their images and information.