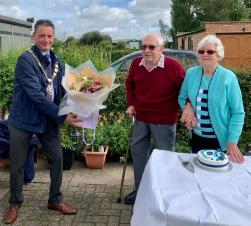 On the 3rd of September, Patrick and Ann Savage of Newton Road celebrated their Blue Sapphire Wedding Anniversary!

On behalf of Rushden Town Council, Mayor Cesare Marinaro paid the couple a socially distanced visit to congratulate them on this huge milestone and to hear their story.

The couple, who have been together for an inspirational 69 years and married for 65, met at a village dance back in 1951. Ann lived in Newton Bromswold and Patrick would cycle over from his village in Riseley, to court Ann. They married at St Peters Church, Newton Bromswold in September 1955 and shortly after, moved into their Newton Road home where their 2 sons, John and Ian were born and grew up. Before he retired, Patrick was the drawing office manager at Timpsons press in Kettering and Ann a housewife. They have always shared a love of animals and wildlife and enjoy spending time in their garden, feeding and watching the birds.

The Mayor commented, "It was clear to see that Patrick and Ann Savage are real family people who are adored by everyone including their 3 Grandchildren."

Patrick, 86 and Ann 85 celebrated their anniversary by spending a few well deserved days in Thirsk, Yorkshire, one of the couple's favourite places. They were said to be delighted when returning home to a belated celebration in the garden with tea and cake, plus a surprise visit from the town's Mayor! To top it off nicely, the postman also delivered an anniversary card from Her Majesty The Queen.

When asked what the secret was to a long and happy marriage, the couple both agreed that trust was a major part. Ann went on to say, "You have to trust each other 100%, give and take is also a big factor and sometimes you have to do things you may not want to, but because the other one wants to."

Thank you to Patrick and Ann for letting us share your amazing milestone with the people of Rushden, we wish you all the very best!

If you know someone with a big occasion coming up; 100th Birthday, Golden, Diamond, Platinum or Blue Sapphire Anniversary, do get in contact with us and we'll help them celebrate!