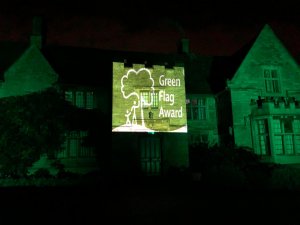 Record-breaking year as more than 2,000 green spaces across the country get international quality mark

Tonight Hall Park has joined buildings and landmarks across the country, including the White Cliffs of Dover at Samphire Hoe, the London Stadium in Queen Elizabeth Olympic Park and Salford's Media City, going green for parks to celebrate Hall Park, Rushden Green Flag Award success and to say a massive thank you to the parks staff, volunteers and the Green Flag Award Judges for all their work this year.

Parks and green spaces across the country will be raising their Green Flag Award with pride in a year when millions of people have seen the value of having great quality green spaces on their doorstep.

Among them will be Hall Park in Rushden, which is raising a Green Flag Award for the 7th time.

The Green Flag Award scheme, managed by environmental charity Keep Britain Tidy under licence from the Ministry of Housing, Communities and Local Government, recognises and rewards well-managed parks and green spaces, setting the benchmark standard for their management across the United Kingdom and around the world.

Hall Park is one of more than 2,000 sites across the country to collect the award for 2020.

A spokesperson for Rushden Town Council said, "Once again we are very proud Hall Park has been awarded Green Flag for the 7th consecutive year. The recent months have highlighted how important quality green spaces matter to residents and visitors, and this award celebrates the dedication that goes into maintaining Hall Park to such a high standard."

Commenting on Hall Park's success, Keep Britain Tidy Chief Executive Allison Ogden-Newton OBE said: "This year, more than ever, our parks and green spaces have been a lifeline and we know that millions of people have used them to relax, meet friends, exercise or simply escape for a short time.

"It is testament to the incredible dedication and hard work of parks staff and volunteers that, despite the challenges that went along with record numbers of visitors, Hall Park owned and maintained by Rushden Town Council has achieved the highest international standards by the Green Flag Award."

Big thank you to Lightning Lloyd for the amazing light up!

The Green Flag Awards Scheme (http://greenflagaward.org/) is run by the environmental charity Keep Britain Tidy, under licence from the Ministry of Housing, Communities and Local Government, in partnership in the UK with Keep Scotland Beautiful, Keep Wales Tidy and Keep Northern Ireland Beautiful. The scheme also operates in an additional 14 countries including Portugal, New Zealand and USA.

Keep Britain Tidy is a leading environmental charity. We set the standard for the management of parks and beaches, inspire people to be litter-free, to waste less and to live more. We run programmes including Eco-Schools, the Green Flag Award for parks and green spaces and the Blue Flag/ Seaside Awards for beaches. To find out more about Keep Britain Tidy, our programmes and campaigns visit www.keepbritaintidy.org.

Any green space that is free to enter and accessible to the public is eligible to enter for a Green Flag Award. Awards are given on an annual basis and winners must apply each year to renew their Green Flag Award status. A Green Flag Community Award recognises quality sites managed by voluntary and community groups. Green Heritage Site accreditation is judged on the treatment of the site's historic features and the standard of conservation.