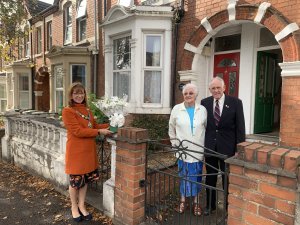 On behalf of Rushden Town Council, the newly appointed Mayor, Mrs Melanie Coleman gave the couple a socially distanced doorstep visit to congratulate them on their fantastic milestone and to discover a bit more about their story…

John, who's an ex service man told the Mayor a charming account of when he first set eyes on Betty at 'the pictures' which led to them becoming childhood sweethearts. They were married in Scarborough in 1960 and moved to Kettering in 1968 where John worked for Shepherds Consultants. In 1994 they then moved to Rushden and have lived here ever since. The couple have 2 children who live in Northamptonshire and who they enjoy seeing often. Betty, still a keen knitting enthusiast, talked fondly of working for the yarn shop 'Play Mates' and John, a big Darby FC supporter, spoke of his football refereeing days.

The couple told the Mayor that they were celebrating their anniversary with a nice slice of cake "we've bought an extra cake so we can cut it up and share it out amongst our wonderful neighbours." They went on to explain how great their neighbours have been throughout the pandemic and how supportive everyone has been.

When asked what the secret was to a long and happy marriage, John laughed and jokingly said, "do as your told." But joking aside, it was clear to see the admiration the couple had for each other and the beautiful life they have shared.

Thank you to John and Betty for letting us share your amazing milestone with the people of Rushden, we wish you all the very best!