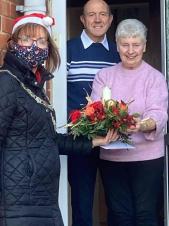 Today Mayor, Cllr Melanie Coleman and the Mayor's Consort, Cllr David Coleman paid a doorstep Christmas Eve, surprise visit to Philip and Wendy Underwood to congratulate them on the fantastic milestone of their 50th Wedding Anniversary and to discover more about their story…

The couple met as children of 14 in Rushden's Hall Park, and it was only when they reached their early 20's that Philip asked Wendy out. They were married on Christmas Eve 1970 at Wellingborough Registry Office.

The couple went on to have their daughter, Sally. Devastatingly, at the age of only 4 years old, Sally passed away due to a health condition.

According to their neighbours, Mr and Mrs Hales, Philip and Wendy are a very caring couple and played a big part in their son's life. In Mrs Hales own words "extremely special and like grandparents to him."

The caring couple that are obviously very good with children, went on to foster a little girl. Samantha was with the couple from 3 years old to the age of 16 and they are still in contact to this day.

Philip worked at Rushden's infamous DB Shoes as a clicker for many years and the he was a Postman until he retired. Wendy worked at Flavell and Hart in Rushden high street, selling ladies and gents fashions.

The couple have a variety of hobbies and keep themselves active. Philip has an allotment and breeds canaries, enjoys running and walking their dogs. Caroline Hales, Neighbour said "They also look after our dog while we are at work so very often he's walking 3." Wendy enjoys meeting up with friends for lunch and going on coach trips. According to her neighbour, she is a well-known face down the high street as she goes down and supports the local shops on a daily basis, enjoying chatting to many along the way!

To help them celebrate their Golden wedding anniversary, Phil and Wendy's neighbours (and friends), the Hales' created an afternoon tea in the garden, decorated with flowers and balloons and with a gazeebo and heater.

When asked by the mayor what the secret was to a long and happy marriage, Wendy said, "it's about give and take" and Philip answered, "to take care of each other."

Mayor, Cllr Melanie Coleman made these comments about the Underwood's story, "it is so romantic, engaged at Easter, married at Christmas, it was lovely to be a tiny part in their special day."

Thank you to Philip and Wendy for letting us share your amazing milestone with the people of Rushden, we wish you all the very best!