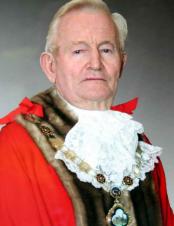 It is with great sadness that we have been informed of the passing of a former Rushden Mayor, Tony Helsdown.

Bruno, as he was known in the town, was Mayor of Rushden from 2007 to 2008, with his late wife Peggy at his side. The Mayoral robes were gifted to the town by Bruno.

He was a great character and had a story for every subject and his love of the town was displayed by his generosity and support to many local organisations over the years.

The town has lost a great character and friend to many. Our condolences go to his family and friends at this sad time and as a mark of respect, the flag at the war memorial will be flown at half mast.