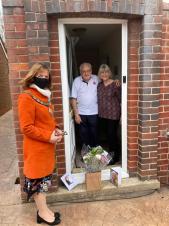 On behalf of Rushden Town Council, Town Mayor, Cllr Melanie Coleman, visited the couple to congratulate them on their fantastic milestone and to discover a bit more about their story…

Valerie and Maurice met in Bedford whilst working at Robinsons Rentals, in different departments. Maurice asked Valerie out on her 17th Birthday by giving her a small box of chocolates. Apparently the first date didn't go too smoothly… Maurice was driving that day for the company and ran out of petrol, unfortunately there was a big shortage of petrol at that time and so he had to wait for someone to rescue him. Valerie finished work and waited 10 minutes, but as Maurice was late, she decided to go home.

According to their daughter Carolyn, the couple's relationship is definitely a credit to her Dad's persistence, with a second attempt at a date being much more successful and gradually friendship and romance blossomed and the couple were married on 3rd April 1961 at St Mary the Virgin Church, Goldington in Bedford.

Valerie, 81, previously a local government officer and Maurice, 86, a previous motor vehicle technician, moved to Rushden in August 1964 and have lived there ever since.

The Couple share two daughters, Carolyn and Susan. Carolyn lived overseas for many years but is now back in Rushden and Susan lives in Higham. They have the pleasure of their two granddaughters and two great grandchildren who live in Rushden and their Grandson who lives in Edinburgh.

The Pair have always loved travel. They bought a tent and in 1970 the family made their first camping trip abroad. Everything, including food was packed into the mini made by Maurice and the first destination was Italy. Carolyn and Susan had to sit on top of the food and bedding. Every year a trip was made to another new exotic warm destination including Turkey and Morocco… Gradually the tent was replaced by motor caravans. Until recently they still enjoyed driving down to Spain and hope to have some motor caravan holidays in UK later this year. They also enjoy walking and have recently enjoyed local socially distanced walks around Hall Park.

The couple told the Mayor that they will be celebrating this big anniversary with a celebratory garden lunch with their daughters and their partners.

Speaking to a representative from Rushden Town Council, Carolyn, the couple's daughter, said this of her parents, "Mum and Dad are the best example you could hope for of marriage to their children and grandchildren. They have always been the best of friends and use determination and ingenuity to ensure they make the best of any situation."

When asked what the secret was to a long and happy marriage, Valarie told the Mayor, "It's friends first and we do everything together." We still go caravanning and have had a wonderful life, travelling.

"When speaking to a representative of Rushden Town Council, Town Mayor, Cllr Melanie Coleman said, "Valerie and Maurice Marsh are such a lovely couple, full of life and enthusiasm and it's been an absolute pleasure to visit them.

"Thank you to Valerie and Maurice for letting us share your amazing milestone with the people of Rushden, we wish you all the very best!

If you know someone with a big occasion coming up; 100th Birthday, Diamond, Platinum or Blue Sapphire Anniversary, do get in contact with us and we'll help them celebrate! info@rushdentowncouncil.gov.uk