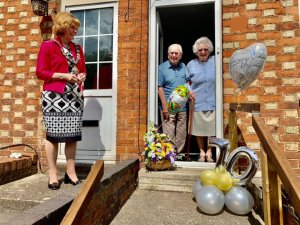 Yesterday, Rushden residents Jack & Elsie Smith became 'a one in a million couple' as they celebrated seventy years of marriage.

Reaching a Platinum Wedding Anniversary is statistically a one in a million chance and so Rushden Town Council, along with Mayor, Cllr Melanie Coleman and the Mayor's Consort, Cllr David Coleman, an anniversary to remember was organised!

As well as being serenaded by an emotional doorstep performance of Vera Lynn's 'We'll Meet Again' performed by 'The Candy Bars' singer Odette, the couple were treated to a Mrs B's Sandwich Emporium home delivery afternoon tea, a special basket of flowers courtesy of the Mayor, a fantastic balloon display courtesy of The Original Factory Shop and Rushden Town Council gifted them with a personalised card which featured the happy couple on their wedding day and a decorated cake. View Video here

Mayor Melanie and the Mayor's Consort, David spent the afternoon inside the couple's garden to find out about their 72 year love story…

Elsie, 92, originally from Hargrave and Rushden-born Jack, 96, have lived in their Rushden home for 68 years. They met at a dance at the Windmill Hall in Rushden. Jack cheekily commented to the Mayor that when he saw Elsie he 'didn't stand a chance.'

After a two-year courtship, the couple married at Higham Ferrers Methodist Church on May 12, 1951.

Jack entertained the Mayor and Consort with stories about his time in service for the Navy, where he was on Radar as a member of destroyer HMS Valorous, protecting convoys on the Atlantic and North Sea.

In their younger years, Jack and Elsie enjoyed dancing and told the Mayor that they have travelled all over London to different dances.

The couple spoke fondly about their shared love of the natural world, how they loved the countryside with trips to Yorkshire, birdwatching and looking at wildflowers.

Jack retired at 60 from his job in the leather industry because of a health scare, Elsie finished work as a floor walker in a shoe factory which gave them more time for their hobbies.

Their Son, Martyn and grandchildren, Annalena and Ella relocated to Germany. Jake, their oldest grandchild remained in the UK with sons Rufus and Felix. The couple spoke fondly of their family, how proud they are of them all and how it's been a really difficult time not being able to see them due to the restrictions but how their son phones them every day.

Over the last year, Jack and Elsie have barley left their home due to Covid restrictions and health matters, but explained to the mayor that they have wonderful neighbours and Jack commented that, "the staff at Sainsbury's Local have been amazing and real lifesavers."

When asked what the secret was to a long and happy marriage, Jack told the Mayor "it's because we are interested in the same sort of things, we aren't the sort who like to sit on the sand, we like to go up on the hills."

"We share the love of birdwatching, my kind is the feathered kind, and jack? well once a sailor always a sailor" Elsie jokingly commented.

The Mayor made these comments about her afternoon with the couple, "I was very privileged to be able to share a little 'socially distanced' time with such a lovely couple.

"70 years is an amazing achievement, but when you see them together you can see why... they are a wonderful team."

From all of us here at Rushden Town Council, we'd like to wish this inspirational and charming couple a very happy 70th anniversary and thank them for letting us share their day and story with the people of Rushden.