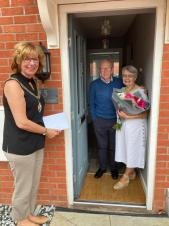 Last Thursday - 17th June, Town Mayor, Cllr Melanie Coleman visited Roy and Margaret Cave to congratulate them on their Diamond Wedding Anniversary and to find out a bit more about their story…

Roy,83, previously a painter and decorator and Margaret, 78, worked for Coop Funeral directors, have both lived in Rushden all of their lives.

Roy has always been very sporty and played lots of sports including football and darts and bowls at a high level and Margaret also played darts and bowls, which they still enjoy today. The couple also told the mayor about their love of horse racing and how they have attended Ascot several times over the years.

Mayor Coleman asked Roy and Margaret the secret to their successful marriage, they both replied "sticking together through thick and thin."

The 'diamond' couple shared their delight in receiving an anniversary card from her majesty the Queen and told the mayor they would be celebrating their anniversary with a Chinese takeaway that night and then out for a family meal at the Carriage House on the Sunday.

The mayor made these comments about her visit, "having known Roy and Margaret for many years, it was a pleasure to pop round to wish them a very happy Anniversary."

Thank you to Roy and Margaret for letting us share your amazing milestone with the people of Rushden, we wish you all the very best!