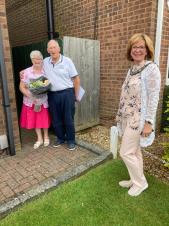 Last Saturday (19th June) Town Mayor, Cllr Melanie Coleman visited Vicki and Brian kempson as a surprise organised by their family to congratulate them on their Golden Wedding Anniversary.

Vicki, who has lived in Rushden all of her life, met Brian (originally from Bilston, Staffordshire) in 1969 at an 18+ group where Vicki was the Chairman. Brian moved to Rushden to be with Vicki and they were married at Rushden's St Mary's Church.

Brian's previous occupation was a printer at Chapmans in Wellingborough and Vicki, an admin assistant until they started a family and then she became a full time mum.

In Brian's younger years he was interested in cars and "chasing women" joked his Daughter-in-law, Annaliese. He is now a keen photographer. When Vicki was younger she enjoyed cycling, social events and clubs, carnivals and organising dances at work. She now enjoys gardening and sewing.

Vicki and Brian have 3 children:- Julie, Steve (Married to Annaliese) and Neil (marrying Janine in August this year) and 7 grandchildren:- Ryan, Connor, Olivia, May, Jordan Evie and Mia. The couple both love nothing better than to spend time with their family.

Mayor Coleman asked the couple the secret of a good marriage, Vicki replied jokingly, "trying not to murder each other" which made everyone chuckle. Vicki went on to say in a more heartfelt tone, "the main thing is having a good friendship with each other" and Brain agreed.

"When speaking to a representative of Rushden Town Council, Town Mayor, Cllr Melanie Coleman said, "Vicki and Brian are such a lovely couple and it's been an absolute pleasure to visit them."

Thank you to Vicki and Brian for letting us share your amazing milestone with the people of Rushden, we wish you all the very best!