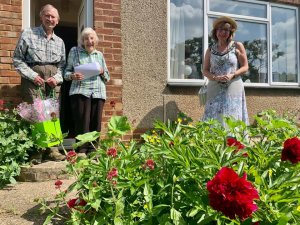 Yesterday, on behalf of Rushden Town Council, Mayor, Cllr Melanie Coleman visited the couple to congratulate them on their fantastic milestone and to discover a bit more about their story…

Roy, who has lived in Rushden all his life (except for a short time when he lived in Irthlingborough), met Janet (originally from Desborough) through their shared passion for cycling. They were both members of local cycling clubs and got to know each other through shared events.

The couple married at St Giles' Church, Desborough and their Honeymoon was spent youth hostelling in Scotland. Janet moved to Rushden shortly after to be with her husband.

Roy was an electrical technical at the Central Electric Company for almost all his career and Janet was a pharmacist, something that she gave up when she had the children but later resumed on a part-time basis as a locum, helping out in local chemist shops.

The Couple share three children, Andrew, who is a statistician in the civil service, Judith, a nurse at Kettering General Hospital. Sadly, their first child, David, had problems with his heart and died when only a couple of days old. They also have 1 grandson.

Roy and Janet enjoy cycling and walking (particularly in Wales and the Lake District), together with holidaying in North Norfolk. They have climbed all the Wainwrights and have a certificate to prove it. They continue to enjoy short walks, especially at Rushden Lakes. They are also interested in various types of history, such as industrial archaeology (mainly Roy) and family history (Janet). They have belonged to St Mary's Church, Rushden for over 50 years.

The Couple told the mayor that they will be celebrating their anniversary with a nice pub meal with the family and said they were overwhelmed with cards and flowers from friends, family, neighbours and even their local supermarket.

When the Mayor asked them what they thought the secret to a long and happy marriage was, Janet replied, "Give and take," Roy agreed and added, "to have similar interests, not all but some."

The Mayor made these comments about her visit, "A sunny doorstep visit to help a happy couple celebrate their Diamond Wedding Anniversary. "Always a pleasure to meet such a lovely people and have a chat.
"Congratulations Janet and Roy and also an advanced Happy 90th Birthday to Roy, for August."

Thank you to Roy and Janet for letting us share your amazing milestone with the people of Rushden, we wish you all the very best!