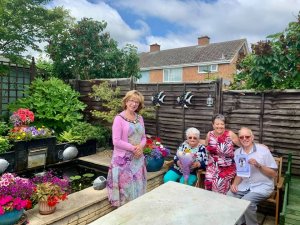 Today, on behalf of Rushden Town Council, Town Mayor, Cllr Melanie Coleman surprised the anniversary couple at their home to congratulate them on reaching this fantastic milestone. And with thanks to their daughter Julie, we were able to share their beautiful and inspiring story with you all.

Pat (86) and Derek (88) have lived most of their married life in Norfolk, moved to Rushden in 2019 to be closer to their daughter and several of their grandchildren and great-grandchildren.

The couple had a bit of a turbulent start to the beginning of their relationship as they were in fact cousins, they didn't grow up together as children and met as adults at Derek's father's funeral, but some family members had objections and so they agreed to separate and wait 3 years until Pat was 21 and could marry without permission.

They didn't see each other or have any contact for over 18 months, but both missed each other terribly. Finally, it was Pat's sister who contacted Derek and said they needed to be together, as apart they were both so unhappy.

Julie, the couple's daughter tells us, " I never tire of hearing what happened next…
"My Mum was a qualified hairdresser and looked out of the window one evening as they were closing up. She realised the man standing in the doorway opposite was my dad. She went over to him; he took her hand and they walked down by the canal. Almost the first words he said to her, after over 18 months apart, were, 'So, are you going to marry me?' to which she didn't hesitate to say 'Yes'."

It's all history from there as on the 14th of July 1956, Pat and Derek were married at St Mary's Church, Chessington in Surrey. As years went on the couple reconciled with Pat's parents who then in their later years, moved to Nolfolk to be closer to their children and grandchildren.

The Couple went on to have 2 children, Julie who was born in 1958 and and Kevin, born in 1961. Julie tells us that her parents have always pulled together as a team and provided a loving fun filled childhood for her and her brother, with Sunday always being 'family day', with days by the coast, stopping to cook breakfast in a layby, followed by a game of ball, using an old bat and the frying pan.

In 2018, Kevin sadly passed away, which was understandably devastating for the entire family. The Mayor spotted a little tribute to Kevin in the couple's garden, his old boots filled with flowers on display by the pond.

Pat and Derek worked together and ran their successful business for nearly 30 years, before retiring in 1997 and making more time to enjoy hobbies such as fundraising committees, craft shows, Derek playing in a local brass band in Norfolk well into his 70's and so much more. Julie commented, "They enjoy new challenges, learning different crafts or tackling DIY challenges (nearly always together)."

And As you'll see by the photos of the couple's stunning garden, over lockdown they have been working hard making it a beautiful haven.

The couple told the Mayor that they very much enjoy living in Rushden, and despite of lockdown, they have still tried to make the most of their new town by visiting a number of places in the local area and hope to get involved in local groups once the restrictions are lifted.

Although Pat and Derek are surrounded by family, 2 of their grandchildren and 5 great grandchildren live all the way up in Hull, but the couple explained to the Mayor that there have been some lovely video calls and they are looking forward to arranging a visit asap.

When the Mayor asked them what they thought the secret to a long and happy marriage was, Pat replied, "We were friends first and still are."

The Mayor made these comments about her visit, "it was a pleasure to meet such a lovely couple and be part of this special day, we welcome them with open arms to the Rushden community."

Thank you to Pat and Derek for letting us share your amazing milestone with the people of Rushden, we wish you all the very best!