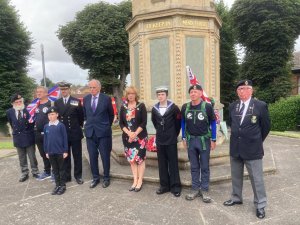 Last Saturday, Town Mayor, Cllr Melanie Coleman met with participants to show her support at the start of a 74k March (1km for each day of the conflict in the Falkands) to raise money for the Falklands Veterans Foundation (FVF) and Liberty Lodge, the first UK charity for Falklands veterans and their immediate families.

The March started in Rushden and passed through Northampton, Kettering and Wellingborough before finishing back in Rushden.

Veterans were also participating in all or some of the walk including former Royal Navy sailors, Royal Marines and a Falklands veteran.