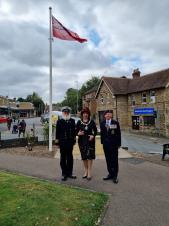 Today The Red Ensign Flag was raised at the Cenotaph to commemorate Merchant Navy Day 2021.

Merchant Navy Day is dedicated to honour the brave men and women who kept the 'island nation' afloat during both World Wars and for the modern seafarers who are responsible for UK imports.
The Red Ensign or 'Red Duster' has been the recognised flag of the British Merchant Navy since 1854.