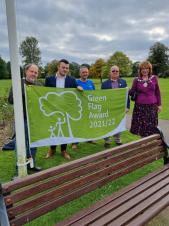 We are delighted to hear that Hall Park, Rushden has been awarded its 8th #GreenFlagAward status.

In a record-breaking year for the Green Flag Award, as the scheme marks its Silver Jubilee, Hall Park is one of 2127 celebrating success today

Today, Rushden Town Council has raised the Green Flag Award at Hall Park. The award is the international quality mark for parks and green spaces.

After 18 months that have seen our parks and green spaces play a vital role for people through lockdowns as a place to relax, exercise and meet friends and family safely, the news that [name of site] has achieved the Green Flag Award is testament to the hard work and dedication of the team that make the green space a great space that everyone can enjoy.

Hall Park joins parks and green spaces as diverse as the National Memorial Arboretum in Staffordshire, Woodhouse Park in Peterlee and Chiswick Old Cemetery in London.
Commenting on the news that Hall Park has achieved the Green Flag Award standard, Green Flag Award Scheme Manager Paul Todd said: "I would like to congratulate everyone involved in making Hall Park worthy of a Green Flag Award."

"To meet the requirements demanded by the scheme is testament to the hard work of the staff and volunteers who do so much to ensure that Rushden Hall has high standards of horticulture, safety and environmental management and is a place that supports people to live healthy lives."

The Green Flag Award scheme, managed by environmental charity Keep Britain Tidy under licence from the Department for Levelling Up, Housing and Communities, recognises and rewards well-managed parks and green spaces, setting the benchmark standard for the management of green spaces across the United Kingdom and around the world.

Notes to editors
The Green Flag Award Scheme (http://greenflagaward.org/) is run by the environmental charity Keep Britain Tidy, under licence from the Department for Levelling Up, Housing and Communities, in partnership with Keep Scotland Beautiful, Keep Wales Tidy and Keep Northern Ireland Beautiful.

Keep Britain Tidy is a leading environmental charity. We set the standard for the management of parks and beaches, inspire people to be litter-free, to waste less and live more sustainably. We run campaigns and programmes including the Great British Spring Clean, Eco-Schools, Love Parks, Eco-Schools, the Green Flag Award for parks and green spaces and the Blue Flag/ Seaside Awards for beaches. To find out more about Keep Britain Tidy, our campaigns and programmes visit www.keepbritaintidy.org.

Any green space that is freely accessible to the public is eligible to enter for a Green Flag Award. Awards are given on an annual basis and winners must apply each year to renew their Green Flag Award status. A Green Flag Community Award recognises quality sites managed by voluntary and community groups. Green Heritage Site Accreditation is judged on the treatment of the site's historic features and the standard of conservation.