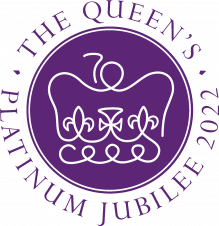 March/April 2022
The Queen's Platinum Jubilee Beacons and Associated Activities June 2, 2022
Thousands of town criers, along with Pearly Kings and Queens, traditional and Northumberland pipers, buglers and choirs from communities across the four corners of the nation and the Commonwealth will lift up their voices and play and sing specially commissioned music prior to the lighting of over 1,500 Platinum Jubilee Beacons, at 9.45pm on Thursday 2nd June 2022.

· At 2pm hundreds of town criers and 50 Pearly Kings and Queens will announce a specially-written Proclamation heralding the lighting of the beacons later that evening.
· At 9.35pm local time across the UK and Commonwealth, traditional and Northumbrian pipers and pipe bands will play Diu Regnare, a unique tune specially-written for the occasion by Piper Major, Stuart Liddell, the world's leading piper.
· At 9.40pm buglers linked to local beacon lightings across the UK and the capital cities of the Commonwealth will officially announce the lighting of the beacons with a specially written bugle call, entitled Majesty.
· Then at 9.45pm exactly local time, and to coincide with the lighting of the beacons, community choirs across all nations will sing Song for the Commonwealth, which has been written and composed by Lucy Keily, from Australia and Vincent Atueyi Chinemelu from Nigeria.

Bruno Peek LVO OBE OPR, Pageantmaster of The Queen's Platinum Jubilee Beacons, said:
"Building on a long tradition of lighting beacons to mark significant royal celebrations, over 1,500 Platinum Jubilee Beacons will be lit across the UK and Commonwealth on the first evening of the four-day Jubilee Weekend (on Thursday 2nd June 2022). The Beacons will enable local communities to join together and pay tribute to Her Majesty as part of the official programme of events.
"For the first time town criers, pipers, buglers and choirs from the UK and the Commonwealth will come together to join in the celebrations in their own individual and special way. It is wonderful to see the range of support for beacon lighting which will highlight both the diversity and the unity of the nation. The Queen has lit up our lives for seventy years through her dedicated service and commitment. We would like to light up the nation and the Commonwealth in her honour.'
The Most Revd Justin Welby, Archbishop of Canterbury said, " I warmly encourage Christians and church choirs throughout the country to join in singing the Song for the Commonwealth at 9.45pm on June 2, 2022 as The Queen's Jubilee Beacons are lit throughout the United Kingdom, Channel Islands, Isle of Man, and in each of the capital cities of the Commonwealth. This will be a moment of remarkable celebration as we join together across different generations, denominations, faiths and communities all over the world in proper tribute to Her Majesty The Queen."
Alan Hay, Chairman of The Royal Celtic Society, whose Patron is Her Royal Highness, The Princess Royal said, "We recognise the enormous commitment Her Majesty, The Queen , has made in serving the Commonwealth and its people. We are delighted therefore to encourage all our members to participate in the Jubilee celebrations and our pipers to play Diu Regnare, composed by our member Stuart Liddell in honour of this historic event."
Melanie Nightingale, Director, Military Wives Choirs said, "Our network brings together over 70 choirs, united through the power of singing, and we look forward to sharing in this momentous celebration. It is only appropriate that this unique milestone in history is marked with music, the strength of which is evident. Our passion for singing is clear and we are honoured to make these performances in a special event for Her Majesty, The Queen's 70th year as our Monarch and Head of the Commonwealth on her Platinum Jubilee."
Dr Nicola Brady, General Secretary, Churches Together in Britain and Ireland, " We are delighted to support this initiative and we hope many choirs will take part as we give thanks for the service that Her Majesty has given over many decades and continues to give."