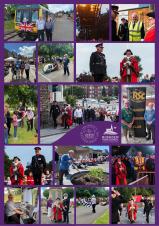 The new Mayor, Cllr Adrian Winkle has had a busy few weeks supporting events over the town for Rushden Celebrates and the Queen's Platinum Jubilee.

"All of the events I've had the privilege of attending over this fortnight were incredibly entertaining and interesting, there were so many highlights, so here's just a brief overview…

"Tree planting at South End Infants School to mark the Queen's Platinum jubilee, Rushden Rotary's Combined Youth Concert, a concert organised by the U3A Choir where I got the chance to join them for their last number (fortunately their voices drowned out my bad attempt), being part of the incredible QPJ Parade and Beacon Lighting event at Hall Park where we were honoured to have the Deputy Lord Lieutenant join us, a visit to the High Street for the Artisan Market organised by Happy Mondays and then my thoroughly packed fortnight came to an end with the eagerly anticipated Soap Box Derby where I received the superb role of being 'starter' of the race.

"It was an honour to attend all events, with the opportunity to meet residents, community groups and businesses alike, however my proudest moment of all was to read the Queen's Proclamation and light the beacon. This will probably never happen again in my time.

"Thank you to everyone who organised, attended and supported these events. What a fantastic way to start off my Mayorship."