Full steam ahead as new Greenway gateway opens in Rushden 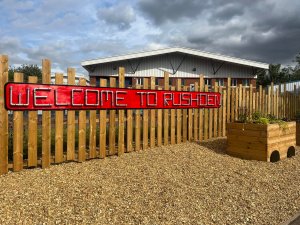 A new gateway to reflect Rushden's railway history has been unveiled by North Northamptonshire Council (NNC) and partners organisations along the Greenway.

The final piece of the Out to Water, Into History project has been co-designed and created in collaboration with the community and students from Moulton College.

Level 1 and Level 2 Construction students based in Higham Ferrers have worked with NNC since initial scoping with the public started last September to design and create the new Gateway, which reflects the heritage of the section of the Greenway that follows the former Wellingborough-Rushden-Higham Ferrers line. Tutors have worked exceptionally hard over the past few months with pupils on the bricklaying, carpentry and plumbing teams to create the new installation including a new 'Welcome to Rushden' sign and planters in the shape of a train.

Thank you to everyone who has worked to so hard on the new gateway along the Greenway in Rushden.

Throughout the process, it was important to us that we took on board the thoughts and views of residents, whilst working closely with Moulton College, to ensure we reflected Rushden's history. I hope everyone will be pleased with the result. If you haven't visited the Greenway yet, I really would encourage you to take a stroll.Cllr Helen Howell, the council's Deputy Leader and Executive Member for Sport, Leisure, Culture and TourismIt is great that we have been able to continue the work started under the former East Northamptonshire Council and our teams are working alongside partner organisations to create such a brilliant asset for the people of Rushden and the surrounding area.Cllr Jason Smithers, leader of the councilWe have been delighted to be involved in the Greenway Gateway project. This has given our students an amazing opportunity to gain further invaluable 'hands on experience'. We are incredibly proud of what they and their tutors have achieved.Corrie Harris, Principal and CEO of Moulton College

The Out to Water, Into History project is a five-year project funded by Heritage Lottery Funding through Nenescape and North Northamptonshire Council. It was launched to improve access between Rushden and the Nene Valley.

For the latest updates on the project, make sure you are following the OTWIH Facebook page.

The OTWIH team would like to thank the teaching staff and pupils at Moulton College for embracing the project, all the local businesses who have contributed to the project and Nenescape.