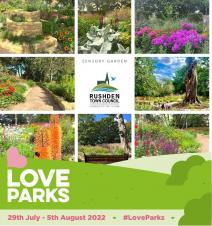 What better way of celebrating Love Parks Week than to announce the opening of Hall Park's new Sensory Garden.

Created as the result of an idea put forward by councillors and the public, and enabled by the ENC Member Empowerment Fund from the late Councillor Ron Pinnock, an area of Hall Park previously used for composting, has now been transformed.

Working with Philip Read and other craftsmen, we have now created a glorious sensory garden totally in keeping with the original features of the park and fully accessible to all.

Footpaths and subtle stone walls have been constructed, together with an Elizabethan snail shell herb garden. The sensory garden offers a nice, secluded spot for relaxation and is home to over 200 plant species, designed to stimulate all of the senses and provide interest throughout the year.

An interactive guide to the garden is currently being developed and will be launched later in the year.

Hall Park's Sensory Garden is now open to the public.