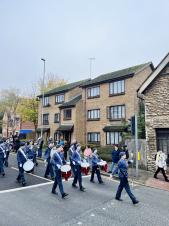 After two years of scaled down Remembrance commemorations due to the pandemic, Rushden Remembrance Day parade made an impressive return.

Rushden gathered on Sunday 13th November to mark Remembrance Day with an exceptionally well attended parade, which this year started at Rushden Hall and then processed to attend a service, both at the War Memorial and St Mary's Church. This Remembrance Day service was organised by Rushden Town Council with support from The Royal British Legion (Rushden Branch) and the Rotary Club of Rushden.

More than fifteen hundred members of the public lined the parade route and gathered at the War Memorial on Church Parade for the service conducted by Rev Tom King and Rev Linnet Smith. The service was supported by Rushden Town Band and the NN10 Choir.

Town Mayor, Cllr Adrian Winkle said, "Remembrance Sunday is always a major event in my calendar, this is where we give our thanks and honour those who have paid the ultimate sacrifice. To see so many of you there paying your respects shows what a caring community we are, I am so proud to be part of it. As the Kohema says, 'they gave their today for our tomorrow, so that we could have the freedom we have today'."
"My grateful thanks to everyone who came along and to the organisers. We will remember them."

Rushden Town Council would like to thank everyone that supported the event including all the organisations who took part in the emotive parade.