This being Cllr Marinaro's last Mayoral event, the Sky Dive has raised in excess of £3,880.00.

Cllr Marinaro has raised a massive £13,200.00 during his Mayoral Year 2019 - 2020, which will go towards his chosen charities Teenage Cancer Trust and Rushden MIND. 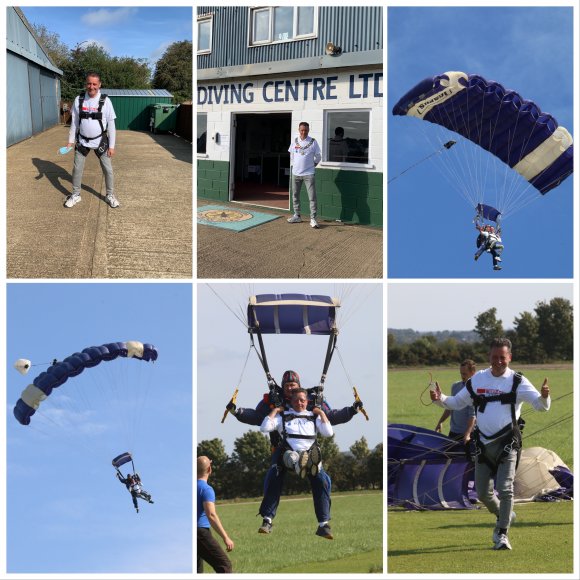 On the 3rd of September, Patrick and Ann Savage of Newton Road celebrated their Blue Sapphire Wedding Anniversary!

On behalf of Rushden Town Council, the Town Mayor, Cllr Cesare Marinaro, paid the couple a socially distanced visit to congratulate them on this huge milestone and to hear their story.

The couple, who have been together for an inspirational 69 years and married for 65, met at a village dance back in 1951. Ann lived in Newton Bromswold and Patrick would cycle over from his village in Riseley, to court Ann. They married at St Peters Church, Newton Bromswold in September 1955 and shortly after, moved into their Newton Road home where their 2 sons, John and Ian were born and grew up. Before he retired, Patrick was the drawing office manager at Timpsons press in Kettering and Ann a housewife. They have always shared a love of animals and wildlife and enjoy spending time in their garden, feeding and watching the birds.

The Mayor commented, "It was clear to see that Patrick and Ann Savage are real family people who are adored by everyone including their 3 Grandchildren."

Patrick, 86 and Ann 85 celebrated their anniversary by spending a few well deserved days in Thirsk, Yorkshire, one of the couple's favourite places. They were said to be delighted when returning home to a belated celebration in the garden with tea and cake, plus a surprise visit from the town's Mayor! To top it off nicely, the postman also delivered an anniversary card from Her Majesty The Queen.

When asked what the secret was to a long and happy marriage, the couple both agreed that trust was a major part. Ann went on to say, "You have to trust each other 100%, give and take is also a big factor and sometimes you have to do things you may not want to, but because the other one wants to."

Thank you to Patrick and Ann for letting us share your amazing milestone with the people of Rushden, we wish you all the very best! 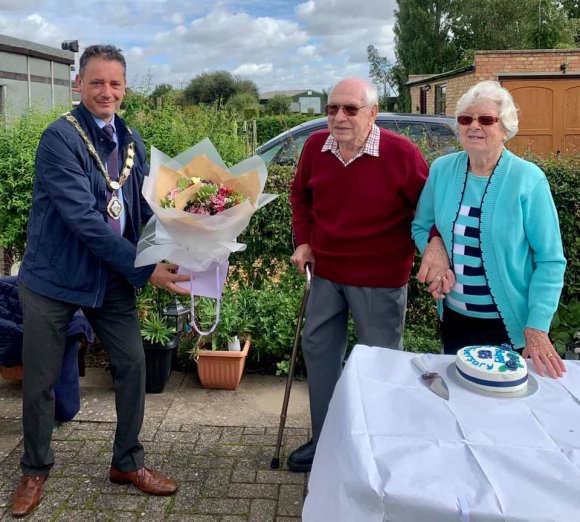 The Mayor thanks Volunteers at Rush 2 the Den

On Thursday 20th August, on behalf of Rushden Town Council, Mayor Cesare Marinaro visited RUSH 2The DEN children's centre to give a huge thanks to Nina and her volunteers for going above and beyond for the children and families of Rushden and to also wish them good luck upon their reopening on the 7th September. While normal activities have been temporarily closed due to COVID-19, Nina and her team have very cleverly diversified, to ensure continuity of support in the community. From compiling and hand delivering fortnightly free activity and craft packs for over 600 local children and young people to assist their mental health and wellbeing, to utilising their building as a temporary food bank, which has been receiving regular surplus food donations from local supermarkets including ASDA, Morrisions, COOP, Waitrose and Costa to name but a few! The food bank has been open to 'anyone who needed a little helping hand' and Nina commented that "the temporary food bank was a lifesaver for many and continues to be in great demand." The RUSH 2The DEN volunteers also helped deliver food parcels to 80 families a week during lockdown.The Children's centre 'Swap Shop' service was also extended and includes baby's, children's and young people's clothing and school uniforms, plus books, equipment and toys. The Swap Shop and food bank are currently open Mon - Fri 9-11am & Sat 9.30-11am. Since lockdown eased, the RUSH 2The DEN youth clubs have been taking place outdoors and in our local parks, with activities such as socially distanced park games, countryside walks and bike rides. As of the 7th September, groups and youth clubs will be able to resume in their Fitzwilliam street building, in a Covid-secure environment. Thank you to all of the RUSH 2The DEN volunteers, the work you carry out really is invaluable to our community and we wish you all the very best upon your reopening.http://www.rush2theden.org.uk/ 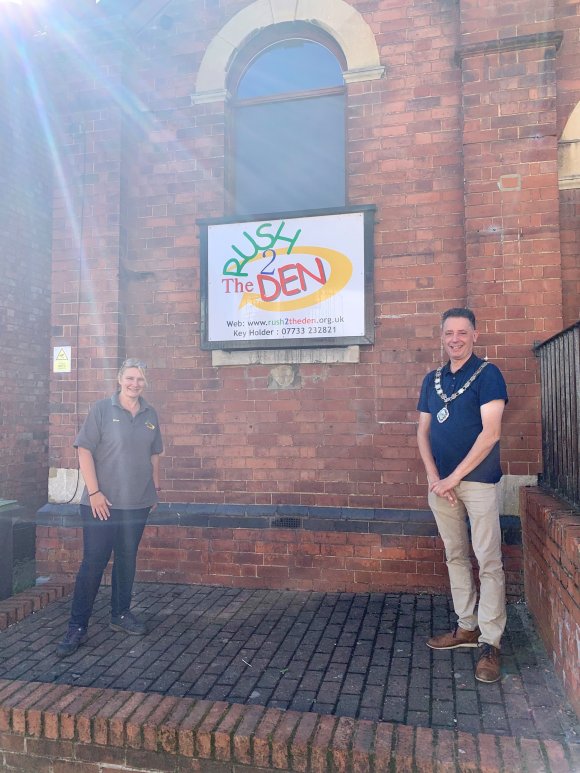 On Wednesday 5th August Worzel met up with some of his Rushden scarecrow friends, who scarily share a resemblance to Mayor, Cllr Cesare Marinaro, and Deputy Mayor, Cllr Melanie Coleman, (Aunt Sally) don't you think? They had a good chat about the Rushden Garden Competition as they toured around Rushden on a 1940's tractor, even taking a look at some plants at Thing-Me-Jigz!

Thank you to everyone who put some coins into the Mayor's charity buckets to raise money for Rushden Mind and The Teenage Cancer Trust. 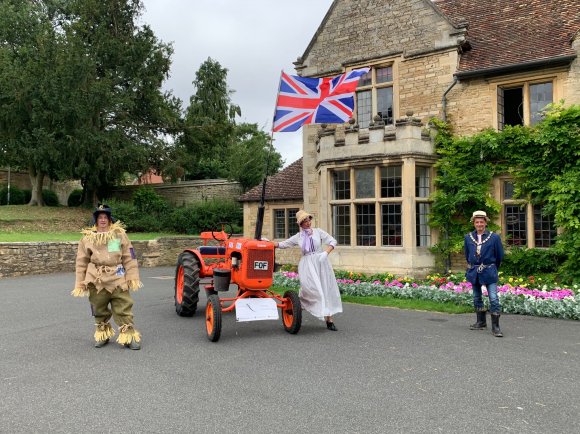 Special 65th anniversary jigsaws have been commissioned to commemorate the milestone 65th year of trading. The jigsaws are on sale from today, with a donation from each one sold going to the local Rushden Museum.

On Friday 30th July the Town Mayor, Cllr Cesare Marinaro, visited to congratulate Pam Osborne, her son Will, and all the staff at Osborne's on behalf of Rushden Town Council. The Mayor said these words, "it's such a great achievement, reaching sixty five years on our high street. It's also such an inspiration to see Pam Osborne at 87 year of age, continuing to work in the shop. Rushden is truly honoured and we wish them all the very best."

Will Osborne commented, "We've been overwhelmed by the good wishes and support of everyone, especially in these difficult times. So a big thank you to our past, present and future customers."

Congratulations to the Osborne's Family, what a remarkable milestone to reach.

Take a look at the fun vintage window display in the photos below (or when you're visiting the high street) and see if you can spot a toy that you had as a child... 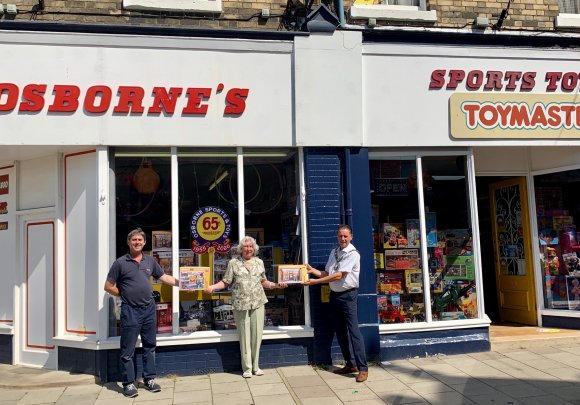 Town Mayor, Cllr Cesare Marinaro, with Pam Osborne and her son Will

The Town Mayor, Cllr Cesare Marinaro, visited Ang's Ices to thank her for her patience and hard work over the last few months (and of course, to have a sneaky 99 too!). Ang's unique order and delivery service was a real 'pick me up' for lots of families and even care homes during lockdown, and it's great to see Ang's Ices back in our park. 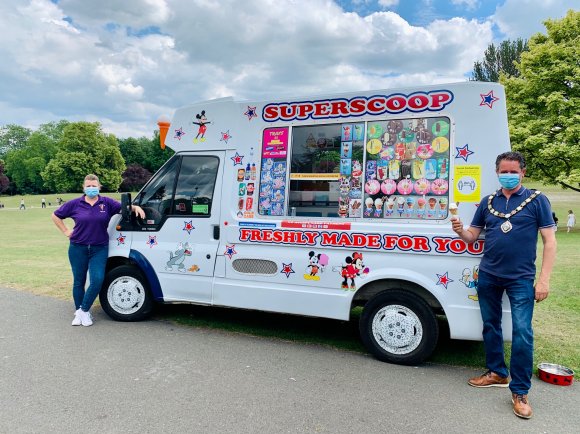 Mayor Celebrates In The Frame on its 21st Anniversary

On Monday 27th July the Town Mayor, Cllr Cesare Marinaro, popped in to congratulate them on behalf of Rushden Town Council.

Steve Martin, owner of In The Frame, gave these comments, "We have enjoyed being part of Rushden's high street over the last twenty one years. We take pride in the services we offer and the products we sell and we are very thankful for our amazing and loyal customers who have stuck with us over the years and who have been very supportive, especially throughout the circumstances surrounding COVID-19. It's great to be back and for the shop to be open again, we hope to be here for many more years to come."

Congratulations and well done to Steve and his staff at In The Frame. Thank you for being an integral part of Rushden's high street for over 20 years! 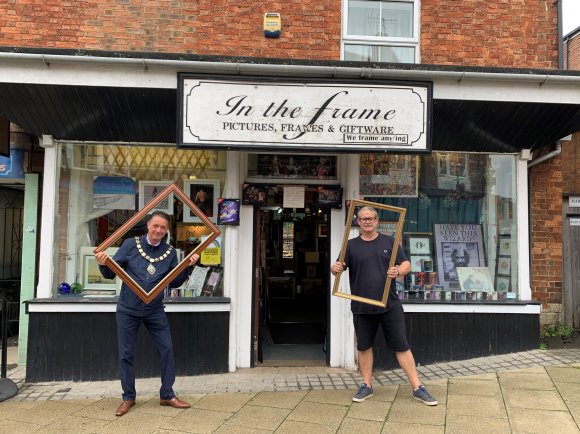 The Town Mayor, Cllr Cesare Marinaro, with his before and after haircut.

Good to see our Mayor complying with Covid-19 regulations! 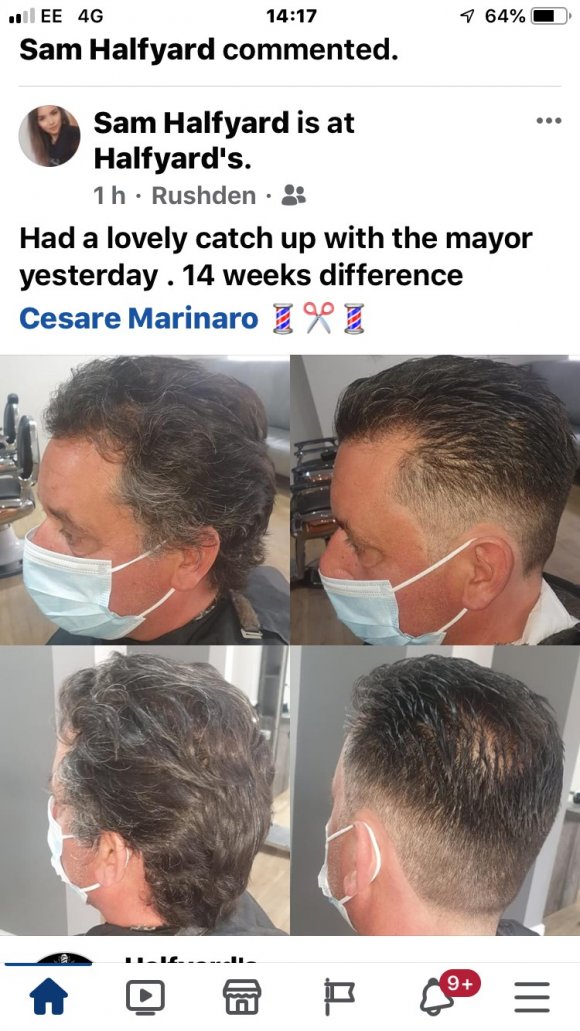 On Wednesday 10th June the Town Mayor, Cllr Cesare Marinaro, visited local businesses in Rushden High Street, to thank them for their support, during the Covid-19 pandemic. 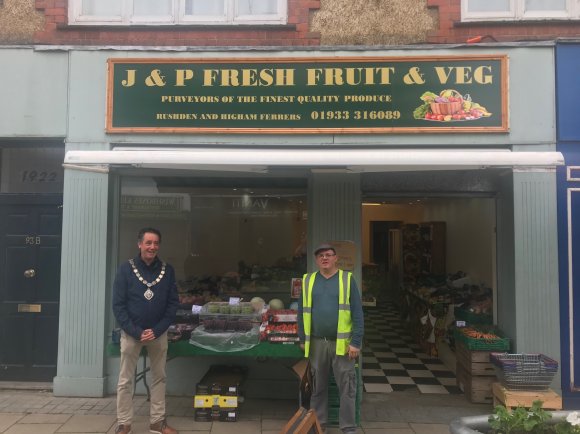 Mayor Supports 'Clap for our Carers' at Redclyffe Care Home

On Thursday 28th May the Town Mayor, Cllr Cesare Marinaro, took part in the last of the 'Clap for our Carers', this time showing his support at Redclyffe Care Home (again observing social distancing). 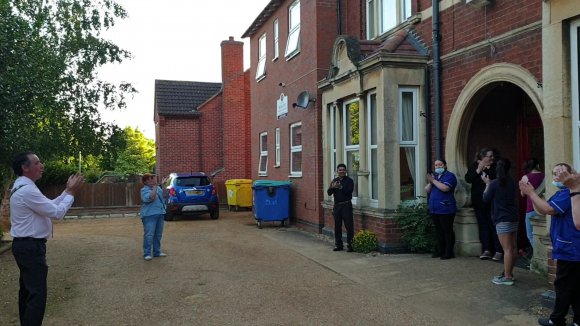 On Thursday 14th May the Town Mayor, Cllr Cesare Marinaro, once again took part in the 'Clap for our Carers', this time showing his support at Victoria House Care Home (again observing social distancing). 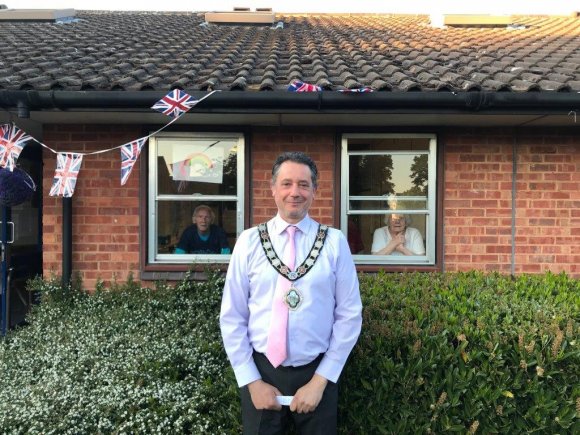 Mayor Supports 'Clap for our Carers' at Spinneyfields Care Home

On Thursday 7th May the Town Mayor, Cllr Cesare Marinaro, was invited to join Spinneyfields Care Home, which is managed by Shaw Healthcare, to show his support for 'Clap for our Carers' (whilst observing social distancing). 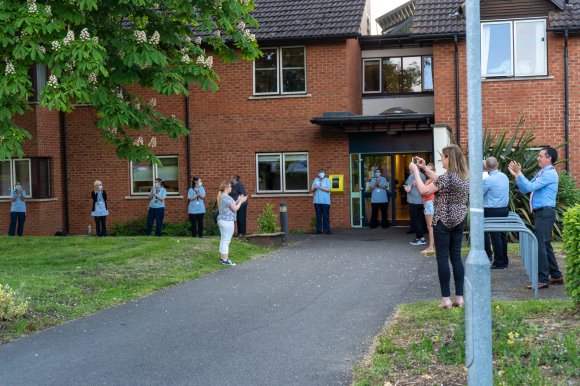 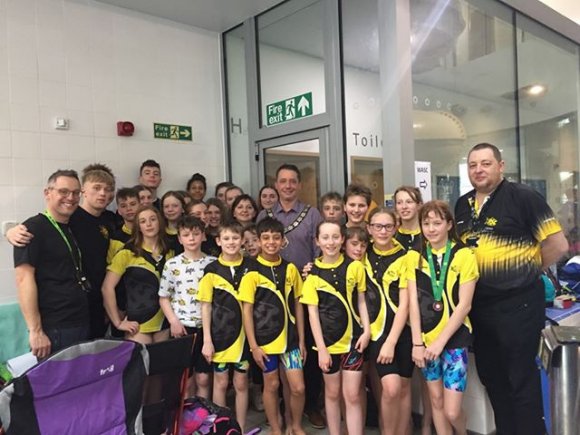 A total of £1,145.86 was raised, which will go towards a four week volunteering expedition to Borneo for Alfie Burge, to help build a sustainable community for the local people and help with deforestation.

For further information and to donate to Alfie's GoFundMe page please click on www.gofundme.com/alfieburge 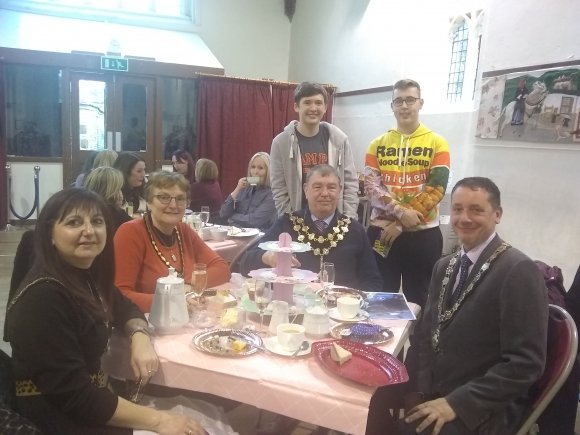 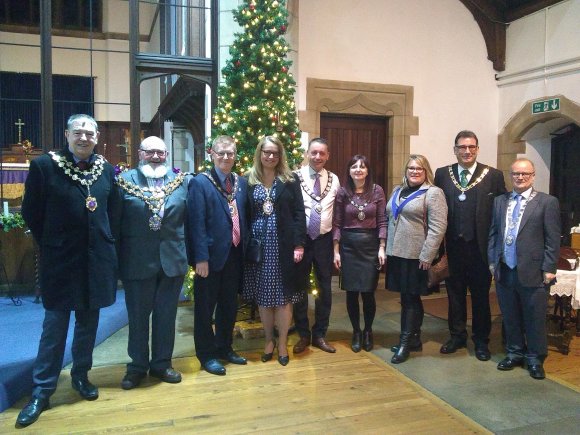 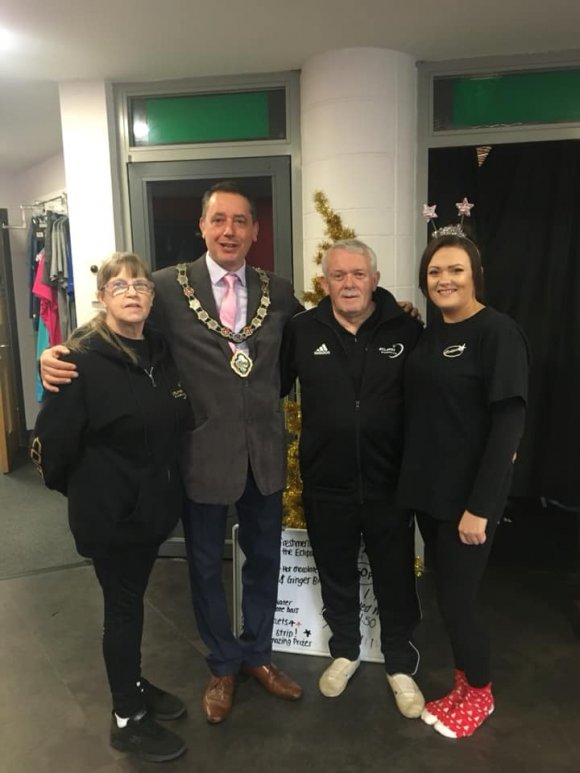 On Saturday 30th November, the Town Mayor, Cllr Cesare Marinaro, joined in with the fun at the Town's annual lights Switch-On. Pictured here with the Polar Bear! 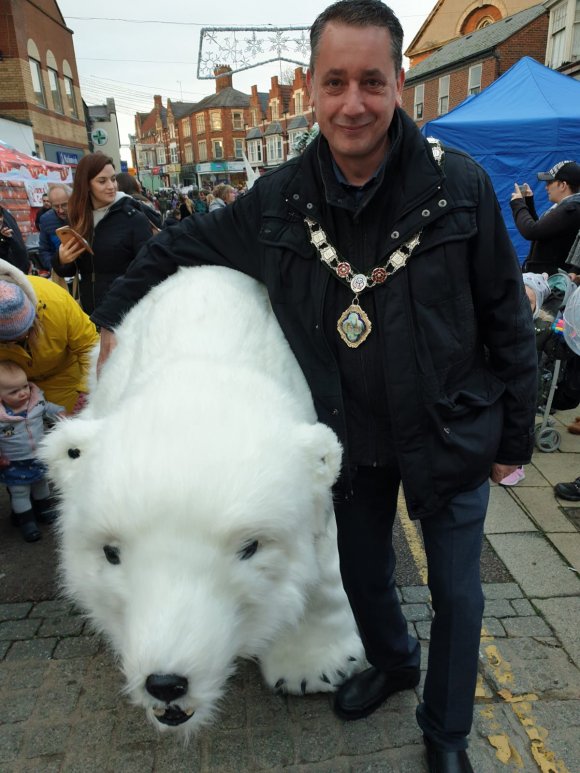 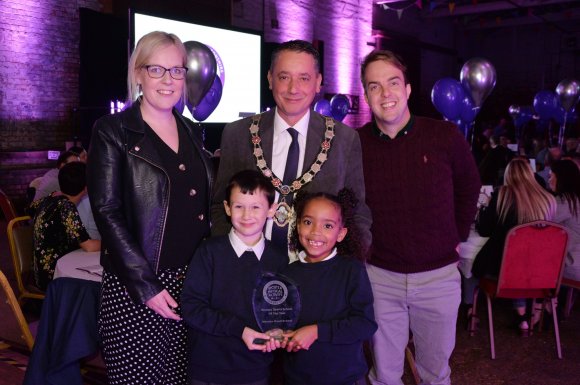 On Wednesday 9th October the Town Mayor, Cllr Cesare Marinaro, joined the celebrations at Victoria House, in recognition of the long serving staff. Russell Brown, Chief Financial Officer, was there to thank staff for 5, 10 and 15 years service. Town Councillors also joined in the fun celebrating the wonderful staff team. 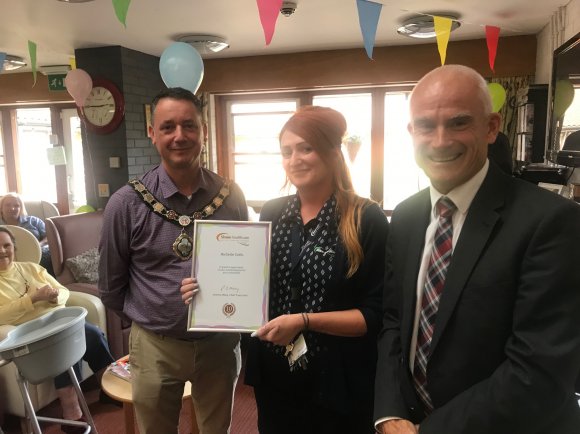 On Monday 23rd September the Town Mayor, Cllr Cesare Marinaro, held his Charity Golf Day at Rushden Golf Club. The sun shone and a fantastic day was had by all, raising in excess of £4,000.00 for the Mayor's Charities, Teenage Cancer Trust and Rushden Mind, which will be divided at the end of the Mayoral year. Well done to the winning team, Paul Hunt & Associates, as pictured. A huge thank you to everyone that took part and for the generous donations. 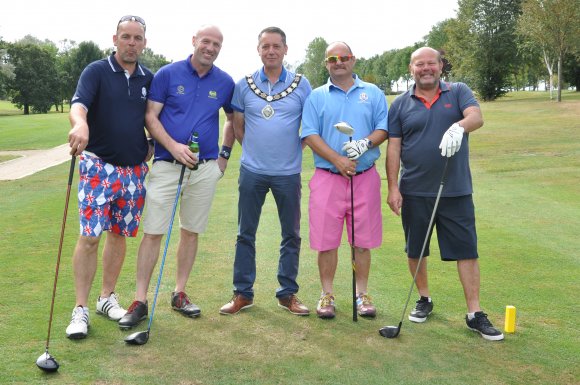 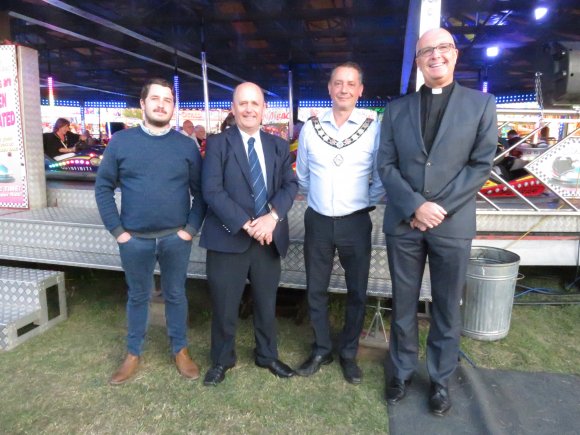 On Saturday 6th July the Town Mayor, Cllr Cesare Marinaro, opened the British Championships for the EMTF-UK Tang Soo Do Championships, at the Pemberton Centre.

The Mayor was delighted to welcome in children and competitors from Cornwall, Scotland, Wales, London, Newcastle, Cambridge, Bedford, Lincoln, Manchester, Milton Keynes and of course Rushden. He was welcomed by their local instructor Master Ashok Kumar, who is also the Vice Chairman for International Organisation and was presented with a plaque for the appreciation and support that Rushden provides for the local group. The Mayor was particularly impressed by the determination, courage and skill of the youngsters. The local group went on to secure 1 Grand Champion trophy, 30 Gold medals, 26 Silver medals and 18 Bronze medals facing tough competition from 126 competitors. All the above will be offered the opportunity to now compete in the European championships that will be held in Rotterdam in October 2019. If you would like further details please contact Master Kumar on 07968 033213. 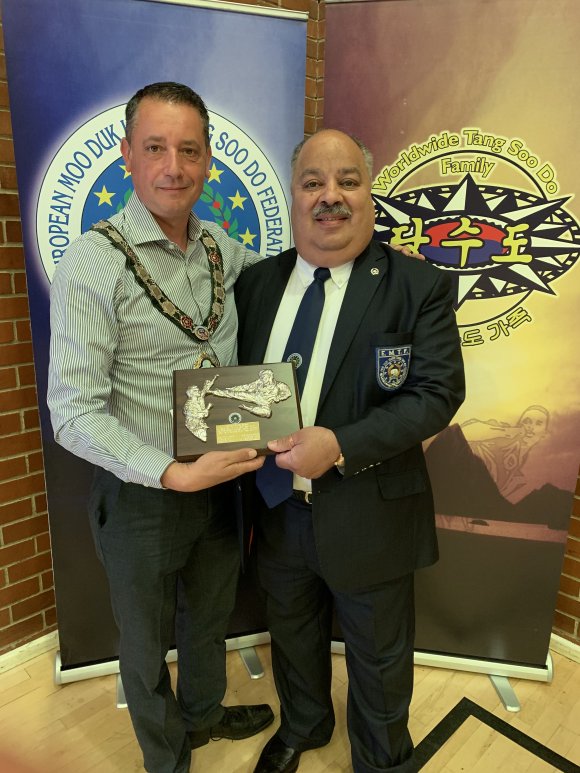 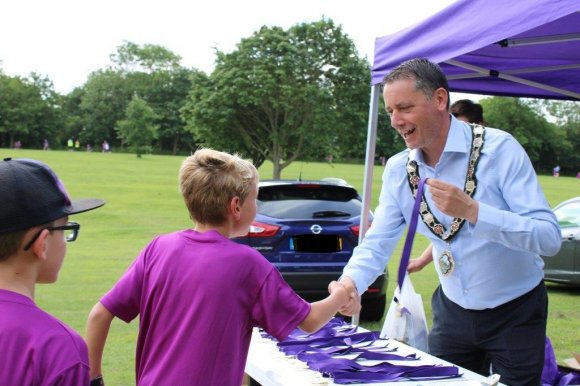 On Monday 3rd June, as part of BBC Radio Northampton's 'Monday Mayor', the newly elected Town Mayor, Cllr Cesare Marinaro, was the first Mayor in the County to be interviewed by Helen Blaby. Well done Cllr Marinaro! To listen to the interview click here 'Monday Mayor' 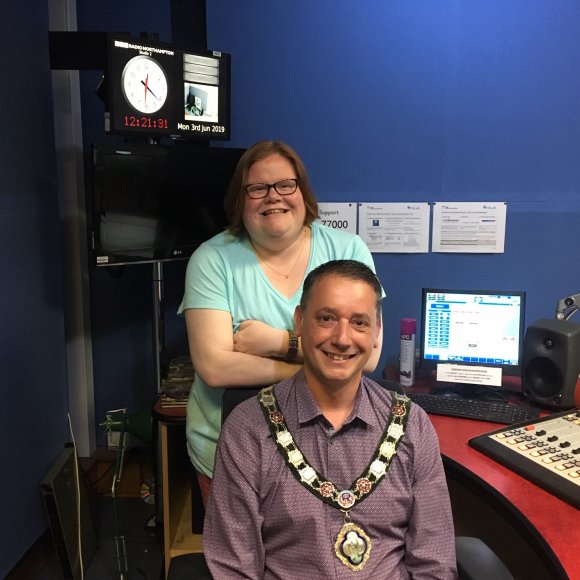 On Tuesday 14th May 2019 at the Annual General Meeting of Rushden Town Council, Cllr Cesare Marinaro was elected as Town Mayor for 2019 – 2020, and his wife, Mrs Sabina Marinaro, was named as Mayor's Consort.